George Floyd, a man, made in the image of God (Genesis 1:27) has been destroyed by another man. How are we, as Christians to respond to grave injustices?

And because of that, all humans are of equal worth. So, when the life of anyone is ended unjustly, it is a travesty. But when the life of someone is ended unjustly by the police or others who have been given authority, the travesty is magnified because those who had sworn to serve and protect actively chose to break their oath by harming those they were given authority to serve and protect.

Be Angry at Evil.

“Oh that you would slay the wicked, O God! O men of blood, depart from me! They speak against you with malicious intent; your enemies take your name in vain. Do I not hate those who hate you, O Lord? And do I not loathe those who rise up against you? I hate them with complete hatred; I count them my enemies. Search me, O God, and know my heart! Try me and know my thoughts! And see if there be any grievous way in me, and lead me in the way everlasting!”

But we should also look deeper than the action of murder. It, unfortunately, is only a symptom. The current level of grief and rage is not simply because George Floyd was murdered on tape. His death just broke the dam. In order to begin to have an accurate understanding of why people are protesting and some are rioting we need to look at the dam and the water it was formerly holding. By looking at the dam and what it held, we gain context. This context should help shape our actions.

The Dam. The Water.

In America, we have the specter of slavery lurking in our recent past and haunting our present. The last living freed American slave died in 1940. Her name is Matilda. My grandparents were alive then.

Jim Crow laws were enforced until 1965.

Martin Luther King Jr. protested for civil rights in the 1950s-1960s. My parents were alive then.

Redlining has had a systematic affect on blacks and other minorities. It has prevented them from owning homes and building up their wealth, condemning many to poverty. This is, tragically, still happening now, in our lifetime.

Mass incarceration has disproportionately affected people of color, and is an ongoing problem.

And then there is this. 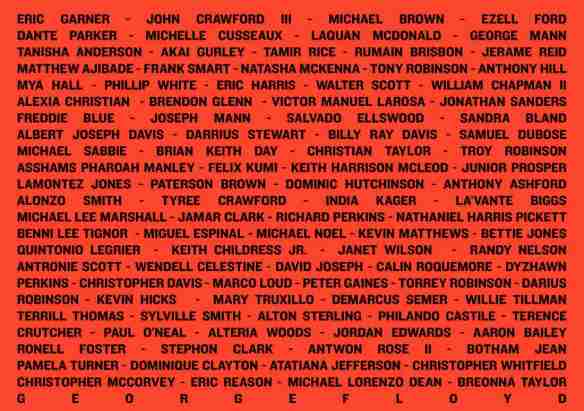 To assume that America’s racial problems are a thing of the past because we no longer have slavery and had a black president is only willful ignorance, an active choice to not connect the dots. How could a few years overturn lifetimes of experience?

The scars of racism are often visible and in other places merely scabbed over. The murder of George Floyd clawed that scab out. And now the repressed pain and anger are flowing red.

Besides anger, how should we respond when the very image of God has been desecrated?

Mourn with those who mourn (Ecclesiastes 3:4; Romans 12:15). Don’t just be generically sad. Be sad for the lives lost, for the injustices ignored. For the suffering papered over. For the division cemented by willful hatred and willful ignorance. And sit with those who are grieving in that sadness.

Sitting in it is difficult, but if you want to love someone who is grieving, you’ll sit with your physical or digital arm around them. Jesus just wept, even when Mary was reproving him he didn’t justify or explain himself. He wept (John 11:28-35). Jesus had explanations at the ready, and as he is God, his explanations would have been perfect and perfectly delivered. But his priority wasn’t justifying himself, his priority was loving the person. And that ought to be ours as well.

This love ought to be the driving force of our actions.

Do nothing from selfish ambition or conceit, but in humility count others more significant than yourselves. Let each of you look not only to his own interests, but also to the interests of others. Have this mind among yourselves, which is yours in Christ Jesus, who, though he was in the form of God, did not count equality with God a thing to be grasped, but emptied himself, by taking the form of a servant, being born in the likeness of men. And being found in human form, he humbled himself by becoming obedient to the point of death, even death on a cross.

If you have the chance to protect someone with a word, or with your body, do it. View others as more significant than yourself. Humble yourself to serve. Christ did it for us while we were still his enemies. So, certainly, we can walk in step with his Spirit, that he gave us to serve and love others.

Nehemiah’s time was corrupt. The Isrealites’ escape from Egypt still played a central role in their culture, yet that did not stop them from selling their brothers back into slavery to the very Egyptians their ancestors were previously enslaved to!

So, Nehemiah calls out this evil.

“I was very angry when I heard their outcry and these words. I took counsel with myself, and I brought charges against the nobles and the officials….I held a great assembly against them and said to them, “We, as far as we are able, have bought back our Jewish brothers who have been sold to the nations, but you even sell your brothers that they may be sold to us!”

Nehemiah goes on and moves towards justice by calling them to repent, “Ought you not to walk in the fear of our God to prevent the taunts of the nations our enemies?”

He does not stop there. He continues his march towards justice. He fed the people out of his own pockets and didn’t collect the full range of taxes, explicitly because previous “governors laid heavy burdens on the people”.

As Christians, this is a model for us to follow. We should call out sin. Point towards what is good. And work to improve the situation with what we have been given. Nehemiah was a governor with authority, and he used it to serve his people. While we likely have much less power and authority than him, God still calls us to action. Think about the widow with only two denari.

Unfortunately, I do not have any clear steps or suggestions for applying this, only principles to apply. I am still working out what this means for me in my context. What I do know is that this must move beyond a mere mental exercise. If we have faith, that will produce action (James 2:14-26). We must be teachable (Proverbs 9:9), humble (Colossians 3:12), servant hearted (John 13:1-17), willing to suffer with others (Jesus wept). We must be willing to suffer for others (Jesus died). In addition, we ought to have compassion on Minneapolis and everywhere, those great cities just as God had compassion for Nineveh (Jonah 4:11).

We believe in redemption (He is risen). So we should never be without hope. Point towards the future, towards the worthy goal of racial harmony. Point to how, in heaven, this long longed for goal is assured. And work to make it happen here on Earth. As we do so, it is right to be grieved. Don’t be above it and stoic. Sit in it.

This is all best done through personal interactions, however, in our increasingly digital world it can and should be done through social media too.

Remind yourself that how others respond when we call out injustice and point them towards justice is beyond your control.